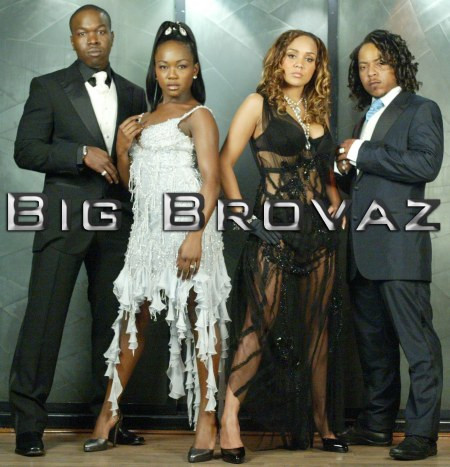 2001–2002: Formation, original lineup and Look Inside
Big Brovaz originally comprised three women (Cherise, who won the MOBO for best unsigned artist in 2000; Dion; and Nadia, born in Reading), three men (J-Rock; Flawless, born in Lagos; and Randy), plus two producers Skillz (also known as JJC, born in Kano, who also managed his group 419 Squad), and Fingaz. The group was referred to as a softer version of the So Solid Crew.

The group was brought together by Fingaz, one of the collective's producers, who already worked under the title "Big Brovaz". The "Big Brovaz" team asked the individual members to showcase their talent alongside underground London R&B and hip hop artists on a compilation that was being put together, entitled Big Brovaz – Watching You. On the album, rather than giving each member an individual track, the producers decided to make the artists work together and perform on the same tracks. That collaborative effort led to the group's formation.

Female member Cherise released a solo album Look Inside before the debut album from Big Brovaz was released. It only spawned one single, "2nd Best", while the album won a MOBO award.

2002–2004: Commercial breakthrough and Nu Flow
The group's breakthrough was in October 2002 when the group's debut single, "Nu Flow" became a hit, particularly in the UK where it made the top 3, spending over four months inside the top 75. Their debut album of the same name was released on 4 November 2002 to rave reviews. This single was covered in 2006 in a UK Halifax TV advertisement.

The group's success continued into 2003 with the release of further singles from their debut album. The group's second single, "OK" made Number 7 in the UK Singles Chart prompting a re-release of the album with a re-ordered track listing and new tracks on 10 February 2003. However, the album was re-issued yet again one month later, on 24 March 2003, with another re-ordered track listing and a new track entitled "Favourite Things". This song became the group's third single and was famous for sampling the song "My Favourite Things" from the musical The Sound Of Music. As well as their own interpretation of the classic song, the group decided to include a cover of the original as a hidden bonus track on version three of "Nu Flow". "Favourite Things" became the group's biggest highest-charting hit to date, peaking at Number 2 in the UK Singles Chart and spending three weeks inside the top 3 of that chart.

The fourth single taken from the album was "Baby Boy". The music video for the single was famous for being inspired by the sitcom Friends. "Baby Boy" became the group's fourth top 10 hit in a row, peaking at Number 4 in the UK singles chart. The fifth single from the album, "Ain't What You Do", which sampled Fun Boy Three and Bananarama's collaboration It Ain't What You Do (It's the Way That You Do It) was the group's fifth top 15 hit, peaking at Number 15.

The group's debut album was certified platinum in the UK, a great achievement for UK R&B and hip hop.

The group next appeared on-screen in the 2004 film Scooby-Doo 2: Monsters Unleashed, in which they performed a version of Sly & the Family Stone's "Thank You (Falettinme Be Mice Elf Agin)" and was featured on the Soundtrack. They also released the single "We Wanna Thank You (The Things You Do)" as the theme song from the movie in April 2004. This was the collective's smallest hit to date, peaking at Number 17 in the UK singles charts. Shortly after this, rapper Flawless was stopped at LAX airport and was found to be in possession of about 2.2 grams (0.07 ounces) of Cannabis out of the UK. This resulted in his sacking from the group in 2004, leaving the remaining 5 group members and two producers to carry on without him.